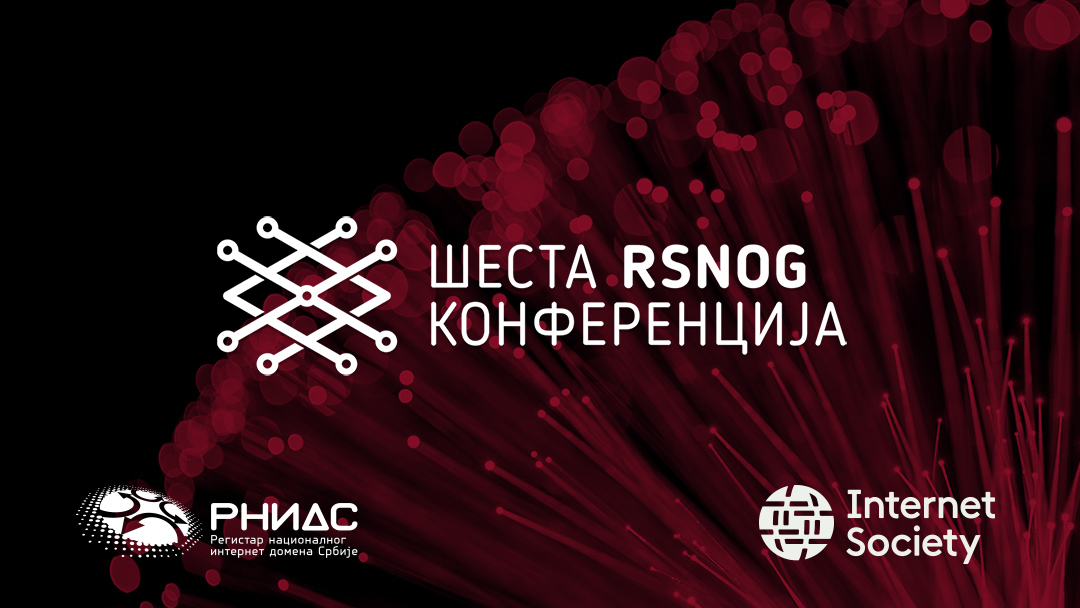 The Sixth RSNOG Conference, organised by the Serbia Network Operators’ Group, was held online on 26th November and streamed live via YouTube. As in previous years, the conference was sponsored by the Serbian National Internet Domain Name Registry Foundation (RNIDS), as well as, this year, by the international organisation Internet Society.

Internet pioneer Vint Cerf opened the conference and, speaking in his capacity as Google’s Chief Internet Evangelist, stressed the fact that the networks were not immune to attack. He talked about the zero trust model and the security mechanisms used for Google’s cloud platform which are intended to “plug” security holes that exist on the Internet. He explained the importance of encryption, not just for the security of information travelling across the Internet but also for its secure storage in the cloud. In his talk he emphasised the importance of the use of security solutions such as DNSSEC and two-factor authentication. The participation of Vint Cerf was made possible with the help of the Serbian Internet Society.

During the introductory portion there were also words of greeting from the head of RATEL (the Serbian telecomms and postal services regulating agency), Dragan Pejović, who talked about the achievements of the Agency and the National CERT this year. He also informed the audience that since the beginning of the pandemic there had been an increase in the number of cyber attacks, both on small and medium companies and on critical infrastructure. However, ongoing education and the work of CERT representatives with local authorities had resulted in an increase in the number of reported security incidents – threats were being more readily detected and work was being done on prevention too. Sava Savić, Assistant Minister of Trade, Tourism and Telecommunications, stressed the importance of the activities of the Serbia Network Operators’ Group, especially in the midst of the pandemic and the public’s increased orientation towards the use of the Internet. He said that the Ministry was working actively on developing networks, network access and broadband infrastructure across Serbia. He also touched on activities relating to the digitalisation of education (installing wireless networks and Internet connections in schools), and also mentioned that over recent years Serbia’s Cyber Security Index had seen significant improvement. Danko Jevtović, member of the ICANN Board, expressed both pleasure and nervousness at having to speak after Vint Cerf, who himself was once an ICANN Board member. He first reminded the audience of the nature of ICANN’s global role as a primarily technical one. He explained that in the light of new policies, initiatives and regulatory changes, the organisation played an advisory role in helping lawmakers and policymakers understand how the Internet really works.

The first block of the conference was devoted to the impact of the COVID-19 pandemic on Internet communication and brought with it some fascinating analyses. Oliver Gasser, from the Max Planck Institute for Informatics, presented a study analysing the Internet traffic of German ISPs, which after the introduction of lockdown had increased by 30%. The analysis compared those periods when traffic was at its peak (workday evenings and weekends) before and after lockdown and noted some drastic changes. The Internet was used most of all for Web conferencing, watching video-on-demand content and for gaming.

Internet traffic had increased significantly during the months of lockdown in Serbia, too, but SOX (the Serbian Open Exchange) whose analysis was presented by Nenad Krajnović, did not experience any congestion and local traffic increased by between 10 and 15%. He said that because of people working from home there had been a major shift in the breakdown of Internet usage as traffic from business users had transitioned into residential networks, gaming traffic had skyrocketed due to people’s need for entertainment and a jump had been recorded in traffic to streaming platforms too. Traffic was at its most intense in March, April and during the flareup of the epidemic in July, while during the autumn months, when business activity is usually at an elevated level, it was hitting as much as 180 Gb per second on a daily basis.

Bartosz Chmielewski from the company PulsSecure talked about remote access software for network operators and about how the pandemic had dramatically changed the way people work, almost overnight; from an average of 20% of employees working from home at the beginning of the crisis, 90% had now begun to do so, which required implementation of VPNs for such employees. He also referred to data mentioned previously, that use of VPNs had increased by 200%.

For the second block of the conference, moderated by Nenad Krajnović, the participants were tasked with considering the benefits and shortcomings of cloud and on-premise solutions. Krajnović talked about the kinds of expense involved in building one’s own datacentre and asked the logical question – in view of this should cloud-based solutions be given priority? The technical, security and legal aspects of these solutions were discussed by panellists Miroslav Kržić from COMING, Aleksandar Rakić from Comtrade System Integration and Boban Mihailović from the Office for IT and eGovernance, who also took the opportunity to present the government’s data centre in Kragujevac.

The third block of the conference was moderated by Vladimir Radunović from the DiploFoundation, who by way of introduction said that this was an excellent opportunity for the audience to gain a good understanding of what CERTs are and the different roles they can play. What does each CERT do, who does it work for – i.e. who are its clients and the users of its services – what do they not do, how are cyber incidents responded to, how are threats monitored, who needs to contact which CERT, when and how, and how do CERTS cooperate amongst themselves? These questions were answered by representatives of several CERTS operating in Serbia, which serve to protect the state infrastructure and national domains, which provide commercial services to clients or which provide monitoring from the point of view of the non-governmental sector. Participants in the panel were Jovan Milosavljević – RATEL, Milan Sekulovski – DCAF, Žarko Kecić– RNIDS, Viktor Varga – Unicom-Telecom, Andrej Petkovski – SHARE Foundation and Milorad Stojanović – Office for IT and eGovernance.

You can watch the recording of the conference below.